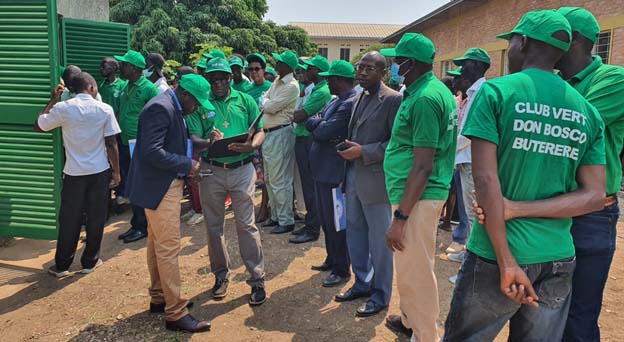 The event, which was organized by the centre management together with the students who are members of the Green Club, allowed the center to present its achievements in vocational education and environmental protection to those present. Apart from the presentation of the trades offered by the center, other major achievements which are the pride of the center of excellence were presented. These are the photovoltaic system, the sewage treatment system, the rainwater collection system as well as the waste management.

Some of the goals for the day were:

In his address during the launch, Br. Njuguna said that equipping the youth with skills and knowledge for employment and self-employment is the same as opening the door of opportunity for them. He further added that through this centre the institution will be able to collect rainwater which can be used for agricultural purposes. Additionally, through the waste water management system the water will be used to irrigate the tree nursery and the trees in the compound to enable a green environment.

The green clubs are already in place to help in promoting and preserving the environment. All these measures are aimed at helping young people grow in a dignified environment in order for them to be obedient to God, love their neighbours and be honest citizens. Br. Njuguna expressed a word of appreciation to Don Bosco Mondo – Bonn for funding the project.

In conclusion, he urged everyone to take care of the systems that have been put to place for efficiency purposes.

The installed solar system has enabled the school to reduce their electricity bill from 2 million Burundi francs to 20,000 BUF.

Others present during the launch were representatives from the Ministry of National Education, Ministry of environment, agriculture and livestock, the mayor’s office, the private sector – especially in the solar energy sector, the representative of the VIS, the Network for the Promotion of Environmental Education in Burundi (RPEEBU) representatives to which the green club of Don Bosco Buterere belongs, a delegation from the green belt association, Salesians in Burundi as well as the community members of Don Bosco Buterere center  among others.

Fr. George Tharaniyil, the executive Director of Don Bosco Tech Africa made a visit to…

Português
Back To Top
×